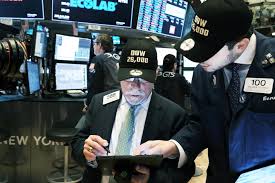 The business economist of the nation have said that they expect the economic growth in the United Nations to be decelerated in the current year and the next year but, at the same time, have predicted that there will be no recession, which means that the country is going to go into their 11th continuous year of expansion.

A survey which had been taken of 53 forecasters has shown that there is an expectation of the economic growth to go slower from a pace of 2.9% in the previous year to 2.3 % in the current year which is 2019 and then for 2020 it has predicted a rate of 1.8%. These forecasts have stayed unchanged from the survey which had taken place earlier in the year in the month of October.

They have pegged the odds of a recession at 66% for the year 2021 in the middle of the year.

The economy of America is expected to stay resilient in the current year and also the next as per the survey despite the risks which have come from the trade war that President Trump has initiated with China and the other skirmishes which they have had with the trade partners of the United States.

Most of the experts have said that the trade tensions are going to be the biggest risk when it comes to economic growth, which is going to be there till the end of the upcoming year.

Jorge Sipple
Technology, Top Stories Tags:No Recession Likely In This Year And US Economy To Grow At 1.8% In 2020