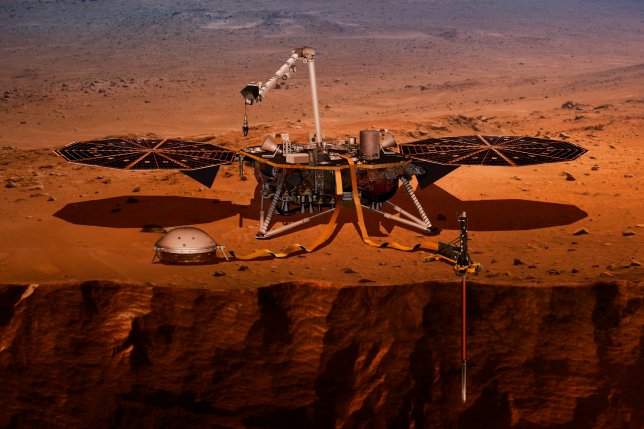 The robot, Insight Lander of NASA, developed to look at Mars’ interiors, has transmitted a wealth of data back to Earth. The primary discoveries are proof of a bizarre magnetic pulse, at times, originating from the planet specifically at midnight. The apparently timed nature of the event grabbed the researchers’ attention glancing through the information. However, the reason for pulsation is unidentified at present. The scientists are attempting to identify whether the signal is from near to the surface or deep underground.

What is odd about this sporadic magnetic wobbling or pulsation is that it takes place at a period when such events would be improbable on our planet, where they are mostly associated with southern or northern lights, enlightens National Geographic. Though the reason is yet to be acknowledged for ones occurring on the Red Planet, researchers speculate that it might have relation with how the lander’s spot on Mars lines up with the magnetic bubble’s tail around the planet. This tail might be interrelating with the magnetic field on its path by bringing about the pulsing. Further study is being planned by NASA researchers, comprising soaring the MAVEN orbiter over the lander to substantiate this speculation. The Insight Lander has been on Mars since Nov 2018. It has collected data such as the upper crust’s temperature, sounds of earthquakes traced inside the planet, and the magnetic field’s measurements.

Likewise, Mars’ mesmerizing image from top to bottom has been captured by the European Space Agency with its Mars Express craft that is in orbit, at present, around the planet. This image displays the Red Planet from its north to south pole, with ice-covered caps on bottom & top and a border of rock formations amid them. The southern and northern hemispheres of Mars are remarkably distinct from each other, with the southern hemisphere being more crater-scarred and mountainous, while the northern hemisphere has low plains with less impact craters.