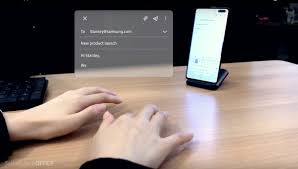 There have bene adverts for laser keyboards for a while and these are often lurking at the backend of the catalog of Sharper Image which is promising a lighter back when the user is on the move. However, the ideal of usage of a virtual keyboard for typing on a smartphone or tablet is not quite as practical when it comes to the real world and it is often extremely unreliable and fiddly.

Samsung has taken a decision to see if it is possible to make this operational without the usage of any unnecessary accessories.

SelfieType is the name of the project which has come out of the lab of Samsung which has used the camera that is front-facing for the tracking of motions. It is going to prop the phone up in a way as if it had been a display and is going to fire the app up and then touch type on a table in the manner of a keyboard being present there. The front-facing camera and an AI engine is going to then examine the finger’s motion and interpret them as if it is being typed on a regular QWERTY keyboard.

The typists who are skilled in touch-typing will only need to apply as there isn’t a guide for where the hands usually go in actuality. As of now, the team behind this project has been trying to make it easier for use and a lot more intuitive for the novices in future.

There were no demos available and therefore there have been no reviews on whether this project will indeed make it easier to use the touch keyboards in future.