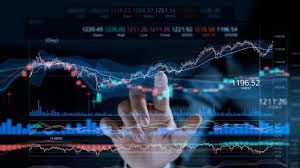 On Thursday, the stocks had ended higher post the strong results of earnings which had been posted by companies like Morgan Staley and Netflix. The investors had also taken into account the deal which is likely to be struck between U.K. and European Union on Brexit.

The shares of Netflix saw a rise of 2.5% after the video streaming giant posted earnings which were over the expectations of the analysts. The company had reported the rise in number of paid subscribers internationally which offset the less number of subscribers which had been added domestically.

Analysts have said that the efforts of Netflix in the content creation in international markets as well as creation of film content began to kick in as the expectations of investors are reasonable now.

Morgan Stanley had also got a kick from the quarterly numbers as it closed 1% higher. The results of the bank had got impetus from the revenues through trading and advisory which turned out to be stronger than the expectations.

As a whole, the season of corporate earnings has been off to a good start. Over 78% of the companies on S&P 500 which have reported have managed to cross the expectations of the analysts.

Experts have said that reporting better than what was expected has been a trend in the year 2018 and that is expected to continue in this quarter as well.

Another major reason behind the rise of stocks was the tweet by British PM where he claimed that they had a great new deal for Brexit.